Milutin Milankovic (often spelled as Milankovitch, 1879-1958), was a Serbian Mathematician and Astronomer. He is the scientist who developed the brilliant theory known as the  Milankovitch Cycles. His theory explains how the earth’s long-term climate changes are caused by the position of the earth relative to the sun. In the 1920’s, Milankovitch presented and defended a brilliant hypothesis supporting his theory on orbital cycles but his brilliance was neither acknowledged nor accepted until the early 1970’s – ten years after his death. Today no one can discuss the cyclic nature of the earth, seasons, ice age, or climate without considering the Milankovitch Cycles that he proposed. Here is the essence of his idea: 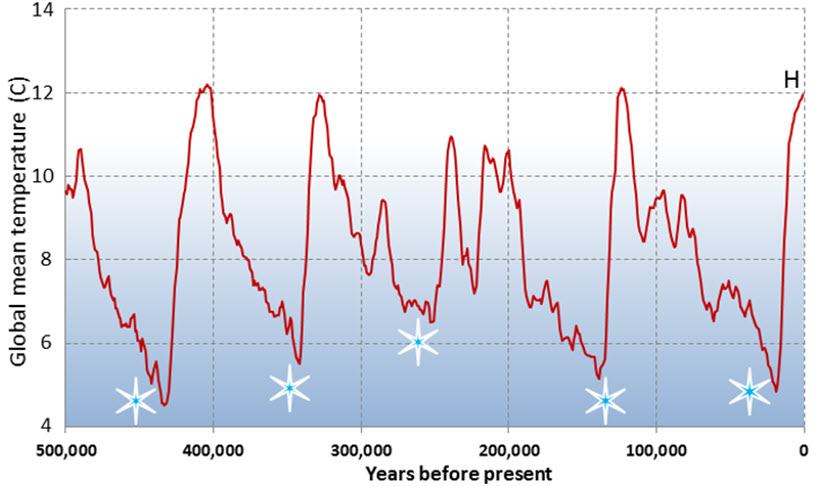 The pull of gravity from our solar system’s neighboring planets, particularly from the two largest planets, Jupiter and Saturn, causes the Earth’s orbit to vary from nearly circular to slightly elliptical. Earth’s orbit around the sun changes from measurably elliptical to nearly circular in a cycle that takes about 100,000 years. Earth’s distance from the Sun at aphelion (furthest to the Sun position) in July, is 95 million miles. The distance from the Sun at perihelion (closest to the Sun position) in January is 91 million miles. This difference of distances causes Earth to receive 6.8% more solar radiation in January than in July (northern hemisphere is winter in January).

The second Milankovitch Cycle involves changes in tilt of the axis of rotation relative to the orbital plane. Tilt varies on a ˜41,000 years cycle from 22.1 degrees to 24.5 degrees. For small tilt angles, the winters tend to be milder and the summers cooler. This implies that smaller tilt angles lead to more glaciation. Currently axial tilt is approximately 23.45 degrees and we are heading into 22.1 degrees (smaller tilt leads to more glaciation!) tilt direction.

The third cycle is due to precession of the spin axis. As a result of a wobble in Earth’s spin, the orientation of Earth in relation to its orbital position changes. Earth’s rotation being counterclockwise (seen from above the north pole), gravitational forces make Earth’s spin axis move clockwise in a circle around its orbital axis. This phenomenon is called precession of the equinoxes because this backward rotation causes the seasons to shift.

The full cycle of equinox precession takes ˜25,800 (25,771.5 to be exact) years to complete. Due to precession, 12,900 years from now the Northern Hemisphere will experience summer in December and winter in June. The North Star will no longer be Polaris because the axis of Earth’s rotation will be pointing at the Vega, the brightest star in the constellation of Lyra.

Each of these three cycles affect solar insolation (receiving energy) patterns. When added together, they can partially cancel or reinforce each other and creates a hot climate or cold climate on earth. The Milankovitch Cycles are among the arguments from opponents of the Global Warming concept. According to Milankovitch theorists, the Earth’s current warming is a part of a series of cyclical events that take thousands of years to complete, and cannot be prevented.

(Note) To understand climate change, we need to explain the colossal coming and going of ice ages. Scientists recovered evidence from the distant past, (1) from deposits left on land, (2) from sea floor sediments, (3) still better by drilling deep into ice and analyze chemical compositions. These paleo-climatologists succeeded discovering a mysteriously regular pattern of glacial cycles. Milankovitch cycles can answer to the nature of these cycles but not all questions we have.

The Reality of the Earth

In 1972, many of leading ice-age experts met at Brown University to discuss how and when the present warm interglacial period might end. A large majority agreed that “the natural end of our warm epoch is undoubtedly near.” Unless there were impacts from future human activity, they thought that serious cooling “must be expected within the next few millennia or even centuries.”

Ice core studies also confirmed a feature that researchers had already noticed in deep-sea cores: the glacial cycle followed a sawtooth curve. In each cycle, a spurt of rapid warming was followed by a more gradual, irregular descent back into the cold over tens of thousands of years. See the curves of Global mean temperature above. We question: “Why humans have only ˜10,000 years of clear history and no longer than that?” We were once confined in cave or near equator, then we are going to be confined in the same places again once current warm weather period disappears.

The Last Glacial Maximum (LGM, or known as the Wisconsin Glaciation) occurred about 20,000 years ago. At that time, global sea level was more than 400 feet (＞130m) lower than it is today. Wave-carved fossil shores stood as testimony of the different sea levels. We can conclude that the Earth ought to get warmer for a while before it cools again. It is interesting to note that during the last interglacial, around 125,000 years ago, temperatures were around 2°C higher than present and sea level was between 5 and 8 m higher. There is possibility that we get this level of warm weather particularly when green-house effects are added to the previous record.

Harold Urey, who received the Nobel Prize in chemistry for his discovery of Deuterium (heavy hydrogen) discussed the thermodynamics of isotopic exchanges. He determined that the isotopic ratio O18/O16 in carbonates could serve as a proxy for the temperature reading at which they were formed. This ingenious method was taken up by Cesare Emiliani from Italy working in Urey’s laboratory at the University of Chicago.

Cesare Emiliani applied this new isotopic methodology to marine sediments. It is now used as the common global stratigraphic reference. This pioneering work of Emiliani paved the way for a large number of further studies. Danish scientist Willi Dansgaard also showed the ratio (O18/O16) of the Greenland and Antarctic (from different hemisphere) cores showed that the climate changes were truly global, coming at essentially the same time in both hemispheres.

Glacial periods are colder, dustier, and generally drier than interglacial periods. These glacial–interglacial cycles are apparent in many marine and terrestrial paleoclimate records from around the world. Ice core studies also confirmed a feature that researchers had already noticed in deep-sea cores: the glacial cycle followed a sawtooth curve. In each cycle, a spurt of rapid warming was followed by a more gradual, irregular descend back into the cold over tens of thousands of years.

Milankovitch combined the cycles to create a comprehensive mathematical model for calculating differences in solar radiation at various Earth latitudes along with corresponding surface temperatures. The model can be run backward and forward to examine past and future climate conditions. It was his belief that obliquity (Axial Tilt) was the most important of the three cycles for climate, because it affects the amount of insolation in Earth’s northern high-latitude regions during summer.

Scientific research is ongoing to understand the Earth’s rotation mechanism and the Milankovitch cycles combination to affect climate. The theory that they drive the timing of glacial-interglacial cycles is well accepted.

The Consequences: Milankovitch vs. CO2

(From Smithsonian Magazine) The concentration of CO2 in Earth’s atmosphere at Hawaii’s Mauna Loa Observatory past 415ppm in 2019. It has surpassed levels in the human history recorded in 800,000 years of data by more than 100 ppm.

We have learned that CO2 gas has green-house effect. Unless we do something about it, our planet is at the point of no return. Or, is it?

Majority of CO2 gas believers are thinking that way. Besides, current heating trend is fueling this belief of the planet continuing the same trend, which is one-way street of up, up and up. Milankovitch Cycles keep reminding you that all are cyclic. Some cycles such as interglacial warm period like we are in today, is also cyclic. Our life span is too short to feel 100,000 years of cyclic nature.

The CO2 believers might say, “Since we had never experienced this level of CO2 gas in history, past historical records of cyclic nature cannot be applied.” I am sure that they did not reference the last interglacial period when average temperature was 2C degrees higher than today and sea level 5 to 8 meters higher.

When you believe in something, you tend to deny everything against you. This is a human weakness. This tendency can be applicable to me, and it is also applicable to you too. We cannot gamble this argument because we will all die before the right answer is proven in the future. One thing I worry is: what happens when the cyclic nature is coming back as Milankovitch predicted? When a cold glacial period comes back to us suddenly within 1000 years, like the group of scientists concerned at Brown University for example, we are in deep trouble. We are in deep trouble for duration of next 80,000 years, without enough food and without proper place to live. Isn’t it better for us to warm our planet a little more for these years?