Asteroids: The Uninvited Guests from the Sky 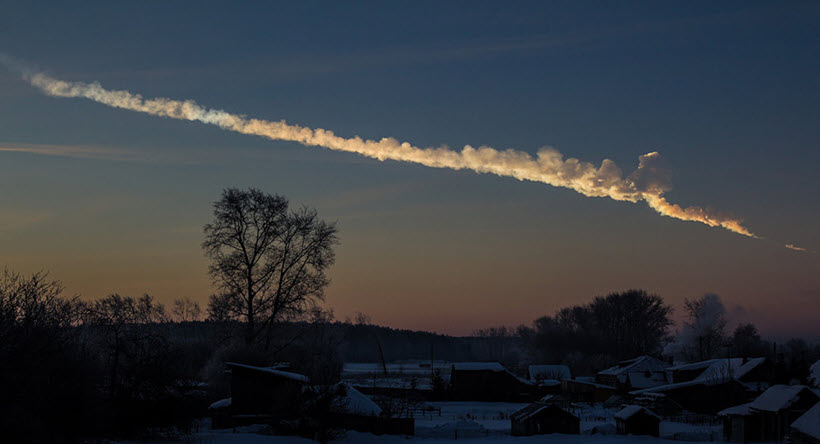 The asteroid smoke trail over the sky of Chelyabinsk, Russia (Source: Wikipedia

According to NASA’s report, early on the morning of February 15, 2013, at 7:20:26 a.m. a fireball exploded over the city of Chelyabinsk, Russia. The explosion caused significant damage as broken glass windows shuttered at least 1,000 buildings and injured 1500 people.

This asteroid was reported as the largest since 1908 when an asteroid hit Tunguska in Siberia. The asteroid entered the atmosphere at a speed of about 64,000km/h (18 km/sec). Based on the duration of the event, it was a very shallow entry. The size of the object before hitting the atmosphere was about 49 feet (15 meters) and had a mass of about 7,000 tons. The explosion happened at a height of 29.7 km from earth and the energy was estimated at 470 Kilotons of TNT, which is roughly 30 times stronger than the atomic bomb the USA dropped on Hiroshima during WWII.

Near Tunguska River, Siberia on June 30, 1908, the Tunguska explosion happened and flattened  an area of
2150 km2. The scene is still impressive today as most of the forest trees inside the area were completely flattened as shown in the black and white pictures below. It was estimated  that the size of the asteroid was around 60m diameter, and its     moving speed was 27km/sec. at an altitude of 5-10km from earth. 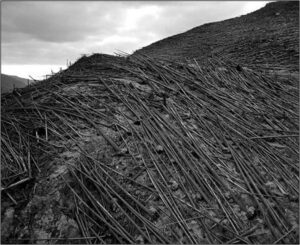 Asteroid explosions in the sky are not a unique event. They happen so frequently that the damages shown in the above two events are a typical outcome of an asteroid when the asteroid size is big enough. Between 1994 and 2013 (20 years), the frequency of small asteroids roughly 1 to 20m in diameter impacting Earth’s atmosphere was measured and the following graph was created (From Wikipedia, Impact Event). These small size asteroids explode in the atmosphere before they reach earth, but when the size is big enough or the earth-entering angle is sharp (closer to perpendicular 90 degrees), the asteroids hit earth with such a strong collision impact that an asteroid crater is created.  Arizona’s Barringer Meteor Crater is a good example. 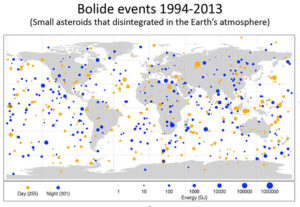 It is clear from this map that there is no “safe from asteroids” area on earth. You can see how dangerously human lives are maintained. We are living with “blind luck.” The only luck we have is that these are relatively small asteroids and most of these small asteroids do not reach the earth’s surface. Then, the chance of one big city being hit by a big asteroid and be wiped out is considered as a rare occasion.

4. The Source of Asteroids

Asteroids, sometimes called minor planets or meteors, are rocky, airless remnants left over from the early formation of our solar system about 4.6 billion years ago. The majority of known asteroids orbit within the asteroid belt between Mars and Jupiter. The belt is estimated to contain between 1.1 and 1.9 million asteroids larger than 1 kilometer (0.6 miles) in diameter, and many more millions of smaller ones. Asteroids range in size from Ceres – the largest at about 940 kilometers in diameter – to bodies that are less than 33 feet (10 meters) across. The total mass of all the asteroids combined is less than that of Earth’s Moon. The Asteroid Belt is not dense even though there are more than a million of large sizes occupied in the asteroid zone. It is general knowledge that NASA sending rockets to Jupiter has little risk of hitting an asteroid between Earth and Jupiter. 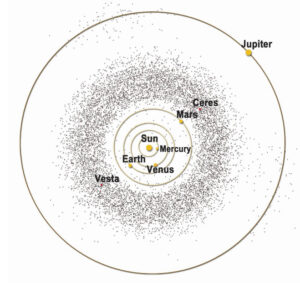 However, the next NASA graphic shows the orbits of all the known Potentially Hazardous Asteroids (PHAs), numbering over 1,400 as of early 2013. Shown here is a close-up of the orbits overlaid on the orbits of Earth and other inner planets. This is the reason why we cannot be too confident about our safety from the asteroids. All inner planets (Mercury, Venus, Earth, Mars) are situated in the danger zone of these PHAs. According to asteroid experts, what we have to worry about is the so called NEO (near earth objects). NEO is any small solar system body whose orbit brings it into proximity with Earth.

The current reality is as follows: Since 1988, over 1200 asteroids with more than a meter in diameter have collided with earth, and of those we detected only 5 before they hit earth with never more than a day of warning. With all our technologies in hand, we struggle to detect dangerous asteroids before they strike. Studying NEOs is important because of the threat they pose. In his last book, Stephen Hawking considered an asteroid impact to be the greatest threat to life on earth. Finding asteroids is difficult. We have detected and catalogued a million asteroids, 24,000 are Near Earth Objects on which we need to keep a particularly close eye. Even if you’ve detected an asteroid, it’s hard to tell if it will hit earth. 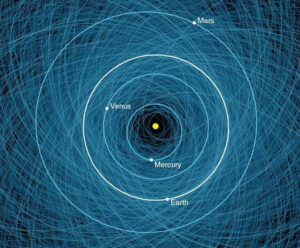 The orbits of all the known Potentially Hazardous Asteroids (NASA)

Earth & Moon  An asteroid (or meteor) is more likely to hit Earth because Earth is a lot bigger than the Moon. In the last few decades significant discoveries have been made about Earth and our neighbors in the sky. For example, we can see the Moon’s surface, that there are about 1,000,000 craters with more than 800 meters (1/2 mile) in diameter and more than 500 million with more than 10 meters in width. We only know of about 180 on Earth! Both the Earth and the Moon have been hit many, many times throughout their long 4.5 billion-year history, yet the Moon has far more asteroid-bombarded craters.

Mars   According to a new study, scientists found 635,000 impact craters with the size of more than 0.6mile (1 km) on Mars. Mars’ air pressure is only 1/25 of that of Earth and the majority (95%) of the air is CO2. Basically, Mars is like Earth’s Moon, no significant erosion or change of the surface keeps craters intact.

Venus   Scientists identified 1000 craters on the surface. Craters on Venus are different from craters on other planets. The planet’s thick atmosphere stops the smaller objects from even reaching the surface of Venus. The asteroids just burn-up in the atmosphere before crashing on the planet’s surface. Venus is Earth’s closest planetary neighbor and it’s often called Earth’s twin because of its similarity in size and density. However, Venus has a thick, toxic atmosphere filled with carbon dioxide and sulfuric acid. Venus is the hottest planet in our solar system, and the air pressure is more than 90 times that of Earth.

Mercury   It is believed that Mercury was hit by a huge asteroid and created a giant crater (Caloris Basin) about 960 miles (1,545 km) across. Researchers have calculated that the asteroid that created the basin had to have been about 60 miles (100 km) wide. Mercury is the most cratered planet in the Solar System, because like the Earth’s Moon, the surface of Mercury is covered in craters and no surface change (like Earth) is possible.

An asteroid impact by a diameter of 10 km (6.2 mi) on Earth has historically caused an extinction-level-event due to catastrophic damage to the ecosphere or biosphere. All living things are affected by the event. Impacts from objects as small a diameter of 50 m (160 ft) are far more common, and yet they are extremely destructive at regional levels.

10km Asteroid   Chicxulub crater is an impact crater buried underneath the Yucatan Peninsula in Mexico. It was formed when a 10 kilometer diameter asteroid struck Earth. The date of the impact coincides precisely with the K–T (or K-Pg) boundary, slightly more than 66 million years ago, and a widely accepted theory is that the worldwide climate change from the event was the cause of a mass extinction in which 75% of plant and animal species on Earth became extinct, including dinosaurs. The crater is estimated to be 150 kilometers (93 miles) in diameter and 20 kilometers (12 miles) in depth, well into the continental crust of the region of about 10–30 kilometers in depth. It is the second largest confirmed impact structure on Earth.

50m Asteroid   The 50m size asteroid is considered as middle size and its impact may happen every several hundred years on earth. The damage is similar to Tunguska asteroid impact which flattened 2150km2 area of Siberia forest (see Section 2 of this article as reference).

However, the pieces of rock falling from the sky is not the greatest concern regarding smaller size asteroid impacts. These asteroids cause most damage with the shock wave produced when it breaks apart in the atmosphere. Remember the Chelyabinsk asteroid injured close to 1500 people in addition to causing damage to buildings in the city.

NEO   In 1998, NASA formally embraced the goal of finding and cataloging, by 2008, 90% of all Near-Earth Objects (NEOs) with diameters of 1 km or larger that could represent a collision risk to Earth. The 1 km diameter metric was chosen because an impact of an object smaller than 1 km could cause significant local or regional damage but is unlikely to cause a worldwide catastrophe. The impact of an object much larger than 1 km diameter could well result in worldwide damage, potentially including extinction of human species. The NASA commitment has resulted in the funding of a number of NEO search efforts, which made considerable progress toward the 90% goal by 2008. However, the 2009 discovery of several NEOs approximately 2 to 3 kilometers in diameter demonstrated that there were still more large objects to be detected. 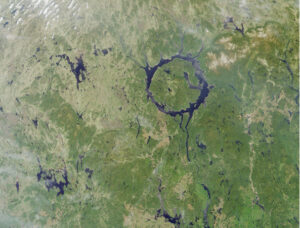 Lake Manicouagan, a 70km diameter ring-shaped lake in Quebec, Canada, is a present-day crater from a 5km asteroid impact of 214 million years ago. (NASA Image)

7. High Probability of Serious Damages in the Future

As commented in his last book “Brief Answers to the Big Questions,” Stephen Hawking considered an asteroid impact to be the greatest threat to life on earth. He wrote:

“Stars engulf planets, supernovae fire lethal rays across space, black holes bump into each other and asteroids hurtle around at hundreds of miles a second. “Granted, these phenomena do not make space sound very inviting, but these are the very reasons why we should venture into space instead of staying put. “An asteroid collision would be something against which we have no defense. “The last big such collision with us was about 66million years ago and that is thought to have wiped out the dinosaurs, and it will happen again. “This is not science fiction; it is guaranteed by the laws of physics and probability.”

Asteroids can potentially cause unimaginably serious damage to Earth. This fact is ignored by the current global warming level linear-mindset. If it is a large asteroid, it includes global burning, global ice age, global scale tsunami, huge earthquakes, wipe out food production capacity and the combination of all these damages together. It will cause extinction of a great many living species of both animals and plants, and even wipe out human beings. Bear in mind, planet Earth has experienced numerous violent changes in the past.

If asteroids pose such a serious impact on Earth, why are we so careless and focus on small subjects like global warming? Global warming issue is a double-edged sword. While current “normal” weather is changing for the worse for some areas, colder climate areas are increasingly benefitting from getting warm, but no one mentions the benefits. An asteroid destroys these “normal” conditions immediately, globally or locally. Since an asteroid’s impact probability is high, it is prudent to say that we have to pay more attention to this serious issue.