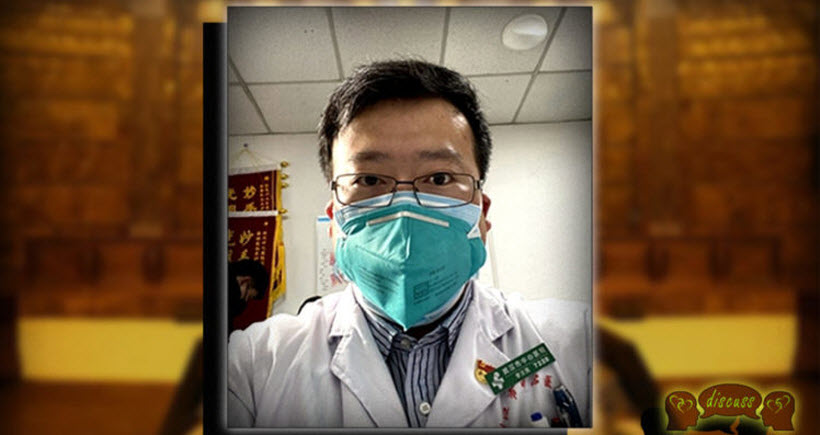 Whistle blower Dr. Li Wenliang was punished by Chinese police and later died due to infection by Coronavirus in early February this year. Now he is hailed as a national hero because of his brave act of whistle-blowing.

The first case, even though details are limited and the specific date unknown, was in early December 2019. Dr. Li Wenliang, an ophthalmologist, treated patients in December in Wuhan, who found similar-to-SARS cases within his patients. On December 30 he told colleagues through a doctors’ social media chatroom. On January 3, 2020, Dr. Li and seven other physicians were forced by China’s security police to sign a document admitting to spreading lies. Dr. Li went back to work after being reprimanded by police. On January 10, he treated a woman for glaucoma. He did not know she had already been infected with the coronavirus. He became sick.

On December 31, facing swirling rumors, the Wuhan government made an announcement confirming 27 cases of the disease but denied human to human transmission, instead indicating that it originated at a Wuhan food market where caged animals are butchered and sold, and that it was spread from infected animals to humans. Chinese President Xi Jinping reportedly gave instructions on the virus response on January 7, which is 13 days before the public was warned about the outbreak’s severity.

On January 24, the first day that China acknowledged the outbreak, The Lancet, a weekly peer-reviewed general medical journal, published that by January 2 more than a third of the patients had no connection with the Wuhan food market, including the outbreak’s index (or first) case. This means the virus could have been moving through Wuhan as early as October. The New England Journal of Medicine also shows there were already seven health care workers infected by January 11.

Why the delay in first acknowledging that a new coronavirus pathogen was identified, and that it did spread human to human?  The answer may lie in the practice of face-saving, common amongst many countries in Asia, including China. Let’s take a closer look at data now available to us.

In China, Tencent Holding Ltd. is a multimedia company which delivers social media network as well as news. On January 26 at 13:42 (1:42pm local time) the Tencent news showed the number of deaths by Coronavirus as 2,577, then by next day (no one knows how long it was on with this number) the number was changed down to 81. The same thing happened on February 1 at 23:39 (11:39pm). The number of deaths reported was 24589, and, just like the first instance, by next day it was changed down to 304. This number, 304, was the same number officially announced elsewhere. Someone in the Tencent media did post the correct number, but it was erased and replaced.

I have a friend working in Shanghai, who tells me that the Chinese casualty numbers are reduced between a factor of 1/10~100 (between 1% to 10% of the actual number). If the original numbers are correct, and the changed numbers are face-saving numbers for the Chinese government, the ratio becomes the following way.

These numbers are within my friend’s suggested range. A huge discount of deceased souls!

WHO Offers to Help China Have Been Ignored for Weeks

Privately, Chinese doctors were saying that they needed expertise help from the outside. But the Beijing government has shown no interest so far. China refused weeks of offers from the US Centers for Disease Control and Prevention according to a February 7 report in the New York Times.

Present and former health officials/diplomats, speaking anonymously for fear of upsetting diplomatic relations, said they believe the reluctance comes from China’s top leaders. They do not want the world to think they need outside help. Many experts say that China’s concern is outsiders’ discoveries of the outbreak would be embarrassing to China.

This secrecy and delay — China’s rigid bureaucratic structures, its culture of obedience and compliance, an unwillingness by government officials to share bad news, a desire to protect economic interests — the outcome is the same: The world had less time to prepare and react to the new coronavirus, which has likely worsened the outbreak and increased the risk of a global pandemic, global health experts said.

One expert says: “This delay in announcing the first cases of coronavirus for several weeks meant that during that time, millions of people traveled outside of Wuhan, so it was precious time lost.”  According to the Financial Times, some 5 million people left Wuhan in the weeks before the city was quarantined on January 22, “thus helping to transport the virus all over the country and overseas.”

Then Why Did WHO President Praised China?

On January 30, World Health Organization director general Tedros Adhanom Ghebreyesus gave a speech, praising China, and has repeatedly continued to praised China’s actions in public statements many times. Here’s what he said in the speech:

… the Chinese government is to be congratulated for the extraordinary measures it has taken to contain the outbreak, despite the severe social and economic impact those measures are having on the Chinese people.

There are a few reactions and reasons related to this praise:

The nearest English synonyms of the face are prestige, honor, respect, dignity, status, reputation, social acceptance, or good name. The face is a more basic meaning than “status”, “dignity”, or “honor”. Just as many Westerners get extremely concerned and threatened when their self-respect is compromised, Asian people are very concerned about “losing face”, which means losing the respect of others particularly in the public eye.

In the Chinese culture face is so important that losing face means you lost “everything” in life. Once you lose face, you cannot recover from it. One writer even mentioned that “face” is impossible to translate into other language. Face-saving is to prevent or to stop losing your or other person’s face. China is probably the front runner of face-saving, but other countries like Japan, Korea, Vietnam, Thai, Philippines, India are not far behind. Arab countries have it and many other countries including both Americas and Europeans have it in different degrees.

What I can see from the above Coronavirus saga is “China is trying to do their “face-saving” as much as they can at every step of the way. I am sure the same trend continues. The face-saving is in their genes. To the Western way of thinking, finding truth is important, but in Eastern culture face-saving is the first priority. This is deadly because face-saving actions are so often against truth findings. Besides, face-saving serves a short-term and one event only for each time. Once you alter the fact to save your face, you may feel the need to continue the same for the event after the event. This is simply cheating every time you do. Unless you remove face-saving from your priority, truth findings are impossible to accomplish. Tens of thousands of people may die because of people’s obsession with face-saving.

Face-Saving Leads to Losing Face in the International World

The Chinese government is doing what it wants: saving their face. They do not want to lose their face in the middle of the Coronavirus pandemics. However, every indication tells us that they are not being honest. When they get accused of their conduct, the Chinese Communist Party (CCP) government is unhappy and they do revenge, or ignore voices from the outside. They have no interest in improving the situation and finding the truth. My point is this: if you do not improve the situation by staying away from face-saving, the situation worsens and losing face is the long run result. China needs to graduate from the “Politics is always No.1” motto.