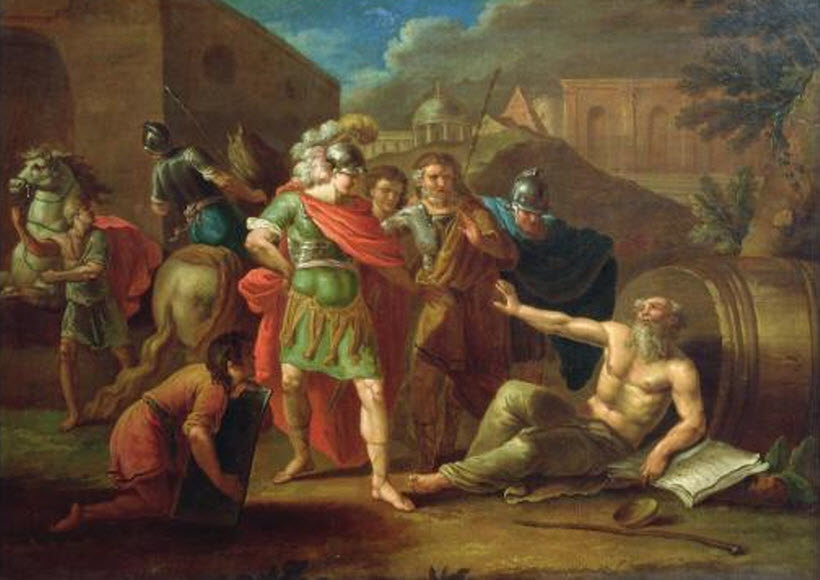 The meeting of Diogenes of Sinope and Alexander the Great in ancient Greece is one of the most well-discussed anecdotes from philosophical history. The most popular understanding is that the story relates as evidence of Diogenes’ wisdom and disregard for honor, wealth, and superficial respect.

Word of Diogenes’ wisdom spread to king Alexander the Great. By the time he was 30, Alexander had created one of the largest empires in the world. Alexander believed Diogenes might have something to teach him, and so he decided to travel to Corinth to see the philosopher.

All the important men of Corinth came out to see their king to offer him praise and gifts and compliments, except Diogenes who did not bother to leave his tub. Since Diogenes would not travel to see the king, the king decided he must go to see the wise man. Alexander was looking for wisdom.

Diogenes was beside his tub, lying in a pool of sunshine on the grass, enjoying the warmth and light after a long winter. When Alexander spotted the great philosopher, he leaped from his horse and ran forward. He quickly reached the man, smiled down and said, “Diogenes, I have heard many stories of your wisdom and I’ve come to ask if there is anything I can do for you. Please, feel free to ask me for anything.”

Diogenes looked up, thought for one moment, and said, “Yes, yes there is.”  “Stand a little to the side, please,” Diogenes requested. “You’re blocking my sun.”

When they heard these bold words, Alexander’s guards gasped, but the king was so surprised by the answer that he could only laugh. After that, he admired Diogenes even more. He stepped aside, and Diogenes thanked him sincerely.

As Alexander and his men turned to ride home, the king smiled. He turned to his servant and said, “I can tell you this, if I were not Alexander, I would like to be Diogenes.”

Many average folks are working to build a comfortable life. The belief these regular folks carry is that if they could just figure it out, they’d be wealthy like the rich people who have secret to being rich. They would then live with less stress, more time, and more money. And money, after all, can buy you the freedom to do what you want. It turns out, the wealthy do have a secret – actually three of them.

“We expect the next car, the next house, or the next promotion to make us happy even though the last ones didn’t and even though others keep telling us that the next ones won’t,”

When we buy a new television or a pair of shoes the new “things” should make us happy. But it’s short-lived and the thrill of the new things wears off quickly. By contrast, saving money and using it to increase your personal financial freedom does make lasting improvements to your well-being and quality of life. Money saved generates future income. Income is what sets you free. And freedom is what truly makes us happy.

But many people do the exact opposite of saving. Folks in America like to “keep up with the Joneses.” If you try to keep up, you’ll get dragged down as well. According to the annual report from the Federal Reserve on the economic well-being of households, released this year, almost 4 in 10 Americans would struggle to come up with $400 in cash to fund an emergency.

One benefit of wealth is having money to spend on a few things that bring you joy. It’s different for each person. A good rule of thumb is to choose one or two things you truly enjoy spending money on. Then cut back to just the basics on everything else.

“Investing” takes a lot of forms. You would associate the term with buying and selling stocks. And that is one common and effective form of investing. But the term applies to any activity that uses capital to create more capital. Being a diligent and disciplined saver is a critical first step… But that alone isn’t enough to put you on the path to wealth.

Why don’t most folks get rich? Because they don’t follow all three of these tenets at once. Chances are…. we are just doing one of these secrets to be rich, so, the majority of us feel no financial freedom throughout our life.

An alternative way to be completely free is to become like the Greek Diogenes: Stay out of “keep up with the Joneses.” Each of us has to learn how to be a modern day philosopher – to be truly free from the social trap. Are you brave and wise enough to be a philosopher?