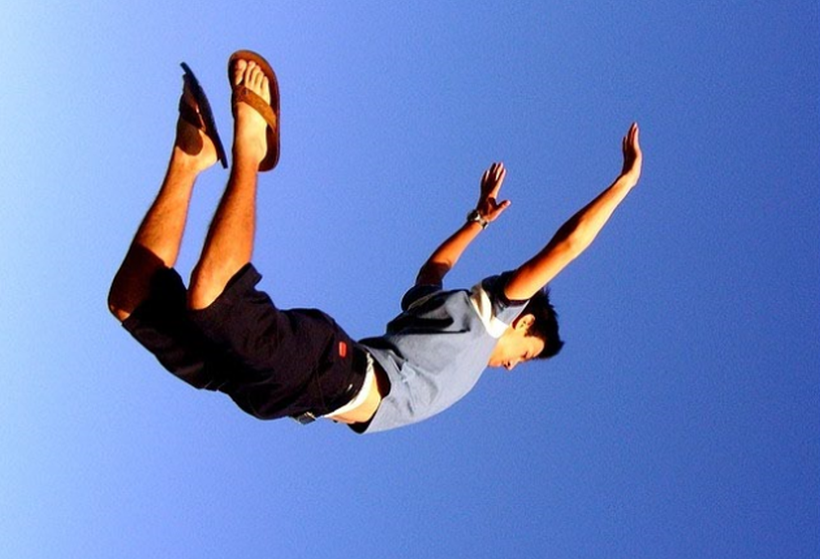 When young, I was in a student dorm room where I shared a room with a science major student. The room had two beds that faced each other and placed against two of the walls. Our desks were located near the window at the foot of each bed. The bed height was ~75cm (30 inches) from our hard floor. It was a rather high bed.

One day while I was in bed catching some shuteye to make up for last night’s short sleep, I noticed very clearly that I was falling from the bed. With Newtonian physics it took me 0.39 seconds to fall the 75cm from bed to floor, for ease of calculation let’s say 0.4 sec. The 0.4 second was a very long time.

The falling from a bed onto a hard floor was not a good experience. I landed on the floor with  hip first followed by one of my arms which had intuitively stretched towards the floor as a natural action to cushion the fall and then finally on my back. You do not want to repeat the same experience ever again. The moment my body started to fall, I knew immediately that I was falling from the bed to the floor: I knew I was sleeping, I knew I was falling, and I knew I was about to hit the floor.

Quickly my brain kicked in:

“Why did I sleep on this side of the bed instead of the side closer to the wall?

“But the free fall has so much freedom that I feel totally free of gravity and I feel so good.”

At the same time, my mind was going through a flashback of my life, of that which I had been doing in recent days, for example, the study I did yesterday was not very good so that I would have to repeat that study again. I also recalled a promise I made to my classmate to whom I owe an explanation. What I had experienced was much more than allocated in our normal time. These thoughts and feelings were too much to process within 0.4 second. I had experience almost 30 to 60 seconds of hard thinking and flashback during this free fall. This was 30/0.4=75 times of time-compression ratio even if conservatively calculated.

In the meantime I learned about a great baseball player who once said that he could clearly see the stitches on the baseball before he hit a home-run. Another player also said that he saw the baseball as having stopped over home plate when he hit a grand-slam. These are moments of extreme slow-motion events caught by the human brain which are similar to my fall experience. We are capable of changing fast moving time into slow moving time.

Crisis at the End of Life

Many years ago, doctors at George Washington University Medical Faculty Associates recorded brain activity of people dying from critical illnesses, such as cancer or heart attacks. A study of seven terminally ill patients found identical surges in brain activity moments before death. Moments before death, the patients experienced a burst in brain wave activity, with the spikes occurring at the same time before death and at comparable intensity and duration.

A team of neuroscientists from the University of Michigan observed, at least in the brains of rats, a sudden surge of electrical activity that continues for roughly 30 seconds after clinical death. What they found was remarkable: before death, activity in a particular frequency called the “Gamma Band” more than doubled in power compared to when the animals were awake.

The low gamma band, oscillating at 25-55Hz, has long been linked to visual consciousness, or the perception and awareness of visual stimulation. It is also present during REM sleep which involves dreaming and complex visuals. After a cardiac arrest, gamma waves also showed higher levels of synchrony. This high level of coherence between different brain regions is often associated with a highly “aroused” brain, a state in which high levels of information processing may occur. The authors concluded that the brain might exist in a hyper-conscious state for tens of seconds after the heart stops.

Conscious thought has also been linked to the strength of connections between the front-most areas of the brain and those nearer the back that deal with sensory information. The team saw that these areas connected by 5 to 8 times more strongly after a cardiac arrest than during either anesthesia or their waking moments. Moments before death the patients experienced a burst in brainwave activity lasting from 30 seconds to three minutes.

We often think of death as flipping a switch: one minute you’re there, next all lights go out. However, a new study suggests the complete opposite – a surge of heightened connectivity. Like a baseball player in “the zone”, 0.01 second becomes eternity. A man in crisis is interesting to watch.